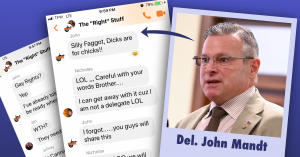 “Silly Faggots, Dicks are for Chicks!!” Mandt wrote in a group message on Facebook to other Republicans in the Huntington area.

The screenshots show Mandt disparaging other Republican state lawmakers for being “sponsors of a queer bill,” and appear to show Mandt calling the mayor of Huntington — the largest city in his district — a “douche” not worth introducing at the capitol.

Mandt is currently up for re-election in the 16th House district. The deadline to register to vote in the upcoming election is Oct. 13, and early voting begins on Oct. 21.

“These screenshots of Del. John Mandt’s comments embarrass our state and hurt the reputation of the office he holds. He’s always been a vocal opponent of the Fairness Act, and now we know why.

This isn’t the first time we’ve seen Del. Mandt disparage the LGBTQ community. In 2019, when Del. Eric Porterfield hinted he would drown his own kids if they turn out to be gay, Mandt was one of the few delegates to offer support for him. Mandt called Porterfield a ‘great guy,’ even though everyone else condemned the comments and tried to distance themselves from Porterfield. Not long after Porterfield called LGBTQ people the ‘modern-day version of the Ku Klux Klan,’ Mandt called us the ‘alphabet hate group.’

When the community he represents decided to hold a vigil to honor the victims of a terrorist attack in New Zealand, John Mandt refused to attend because he didn’t want to be associated with Democrats.

We need to remember that Del. Mandt’s comments reflect more than just his personal views. He carries these views with him every day into the capitol, and they’ve clearly affected how he represents the people of his district. He helped sink our chances of passing the Fairness Act this year, a bill to ensure honest, hardworking LGBTQ people across the state aren’t discriminated against because of who they are or who they love.

In West Virginia, we believe in treating everyone with dignity and respect. We believe in the Golden Rule. But sadly, West Virginia is a state where discrimination against LGBTQ people is still legal. Leaders like Del. Mandt want to keep it that way.

John Mandt has finally shown us who he really is. It’s time for us to show him who West Virginians really are.”