Our hate crimes reform legislation is called the “Justice Through Grace in Communities Act” and it seeks to improve the justice system’s approach to hate crimes in order to redeem, heal, and restore perpetrators, victims, and the affected communities. This legislation is a necessary response to the increase in occurrences of hate crimes across the country. The act also adds to the classes protected in the current hate crimes law sexual orientation and gender identity, which account for 20% of hate crimes second only to race (FBI, 2015). Restorative justice is justice through grace.

Redeem: We want to give perpetrators of hate crimes the opportunity to truly learn from their mistakes. By allowing the judicial system to choose grace as punishment rather than a fine or time served, we take an important step in preventing the cycle of hate from repeating. This is not punishment as a deterrent. This is justice through redemption.

Heal: Restorative justice is not only invaluable to the individuals doing the harm but also their victims and the community at large. Bringing all affected people together to have constructive conversations promotes healing, provides a space where education can exist and creates necessary dialogue about injustice. This is justice through healing.

Restore: The goal of this bill is to allow individuals committing hate crimes to establish a healthy and productive relationship with the communities they’ve wronged. Locking someone up does nothing but breed more hate. We want to stop the cycle of hate and fully reintegrate the person as a productive, empathetic member of society. This approach restores everyone affected by the crime. This is justice through restoration.

In January 2015, Robbie Ratliff spray painted “N—- Lover” on the side of a Hillsboro restaurant, the Pretty Penny Cafe, which is owned by Blair Campbell, a white woman married to a Jamaican black man and the mother of two bi-racial children. Campbell had hoped for the civil rights conviction, not necessarily because she wanted Ratliff to be incarcerated longer, but she wanted the acknowledgment that his words had weight.

The judge sentenced Ratliff to a year in jail, but suspended the sentence for three years. First, Ratliff will have to do some character-building by writing a 2,000-word essay on how he would feel if he were a person of color, and someone had targeted him. He will have an assigned reading, to be determined by the judge, every month. And he will have to complete 500 hours of community service and pay the cost of court proceedings.

Campbell feels like she was given a voice because she was able to talk about the effect the crime had on her life.

Although it is currently within a judge’s discretion whether to use a restorative justice approach, this legislation would require that they consider it in their sentencing and the law would encourage this more effective approach. 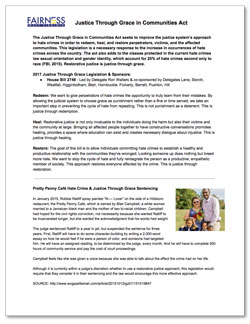 Download our Justice Through Grace in Communities Act One Pager