The Youth Mental Health Protection Act prohibits mental health providers from engaging in, or referring a patient to, sexual orientation conversion therapy when such person is under eighteen years of age.

While we cannot know the precise number of youth who have been subjected to these practices within West Virginia, experts believe that up to one-third of LGBT youth experience attempts to change their identity, including by therapists. This legislation will:

– Protect youth from being coerced into treatments which are ineffective and which can lead to depression, decreased self-esteem, substance abuse, and suicide.

– Prevent parents from being taken advantage of by deceptive agents of the conversion therapy industry.

– Help ensure that LGBT young people receive mental health care that is ethical and in line with medical standards.

– Not affect religious or non-licensed counseling.

Conversion therapy is based on false claims. These harmful practices are based on the false claim that being gay, lesbian, bisexual, transgender, or (LGBT) is a mental illness that should be cured. In fact, this view has been rejected as scientiﬁcally invalid by the American Psychiatric Association and every major mental health group. Unfortunately, young LGBT people may be coerced and subject to these harmful practices, which put youth at risk for depression, substance abuse, and suicide.

This bill will protect LGBT youth from harmful conversion therapy. The Youth Mental Health Protection Act will protect LGBT youth from dangerous and discredited practices aimed at changing one’s sexual orientation, including efforts to change gender identity or expression. The bill will prevent licensed mental health care providers in WV from practicing conversion therapy on youth under the age of 18. 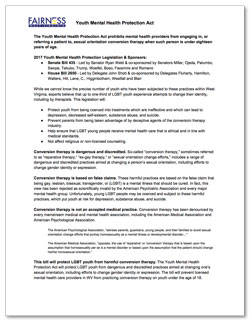