CHARLESTON, WEST VIRGINIA — Fairness West Virginia hosted a roundtable discussion at the Capitol today with Senate President Mitch Carmichael where participants called for the West Virginia Legislature to bring the Fairness Act up for a vote in the upcoming session. The Fairness Act will ensure all LGBTQ people across the state can live free from discrimination in hiring, access to housing and public spaces.

“As a mother of a gay son, this issue is important to me. The Fairness Act will empower all Mountaineers by protecting their jobs, housing and access to public spaces,” said Del. Danielle Walker, D-Monongalia. “My son is lucky to live in Morgantown — one of the state’s 12 cities that have a local nondiscrimination ordinance — but I want him to be protected wherever he goes in the state. West Virginia can affirm that every life is valuable with this bill.”

Versions of the Fairness Act have been introduced for many years in the state legislature. Momentum has skyrocketed in recent years, including lead sponsorship from Senate Majority Leader Tom Takubo and a bipartisan coalition of 44 cosponsors across both chambers. If West Virginia passes the Fairness Act in 2020, it will become the 21st state to pass comprehensive nondiscrimination protections for LGBTQ people.

“Only 11 percent of West Virginians currently live in a municipality where local leaders have passed laws banning discrimination. That’s not enough,” said Andrew Schneider, Executive Director of Fairness West Virginia. “All people — no matter their zip code — should be protected from discrimination.”

“As a transgender woman, I know firsthand the fear and discrimination that so many people live with every day,” said Danielle Stewart, a former army officer and Chair of the Beckley Human Rights Commission who grew up in southern West Virginia. “That’s why we need the Fairness Act, and West Virginia is finally ready for this. The City of Beckley passed a nondiscrimination ordinance earlier this year, which shows that even the most conservative of our state’s residents want our state to protect LGBTQ people from discrimination.”

“As Jews, we are guided by the fundamental principle that all human beings are created b’tzelem Elohim, in the Divine Image,” said Rabbi Victor Urecki of B’nai Jacob Synagogue. “Moreover, we are all too familiar with the indignities of being second-class citizens. Our very history teaches us that discrimination in any form against any members of a community threatens the security of the entire community. That’s why I support updating West Virginia’s laws to extend urgently-needed protection to the LGBTQ community.”

The following leaders also joined the roundtable in support of the Fairness Act:

Passing the Fairness Act this year is particularly important given the Supreme Court’s recent hearing of three LGBTQ employment discrimination cases; in each case, an individual was fired for being LGBTQ. The Supreme Court will issue a ruling on these cases sometime next year, and that decision will either affirm federal nondiscrimination protections for LGBTQ Americans in the workplace, or could strip away federal protections. Fortunately, states can be proactive in banning employment discrimination, and ensuring we also have strong protections in housing and public spaces.

“With Census data showing that 30 people leave West Virginia every day, it is clear we already lose too many people to opportunities in other states,” said Natalie Roper, Executive Director of Generation West Virginia. “As the state struggles with a declining population, West Virginia can’t afford to discriminate against potential employees and citizens who can easily choose to live and work in more welcoming states. In order to attract and retain talent of all ages, West Virginia needs to be a state where all people can live and work knowing they will be free from discrimination of any kind.”

“The country awaits the Court’s decision, but West Virginians can’t wait to be treated fairly,” Schneider said. “Neighboring states are building momentum toward nondiscrimination protections. West Virginia has a limited opportunity to be a leader on this issue if we pass the Fairness Act in 2020 before half of the states adopt comprehensive protections.” 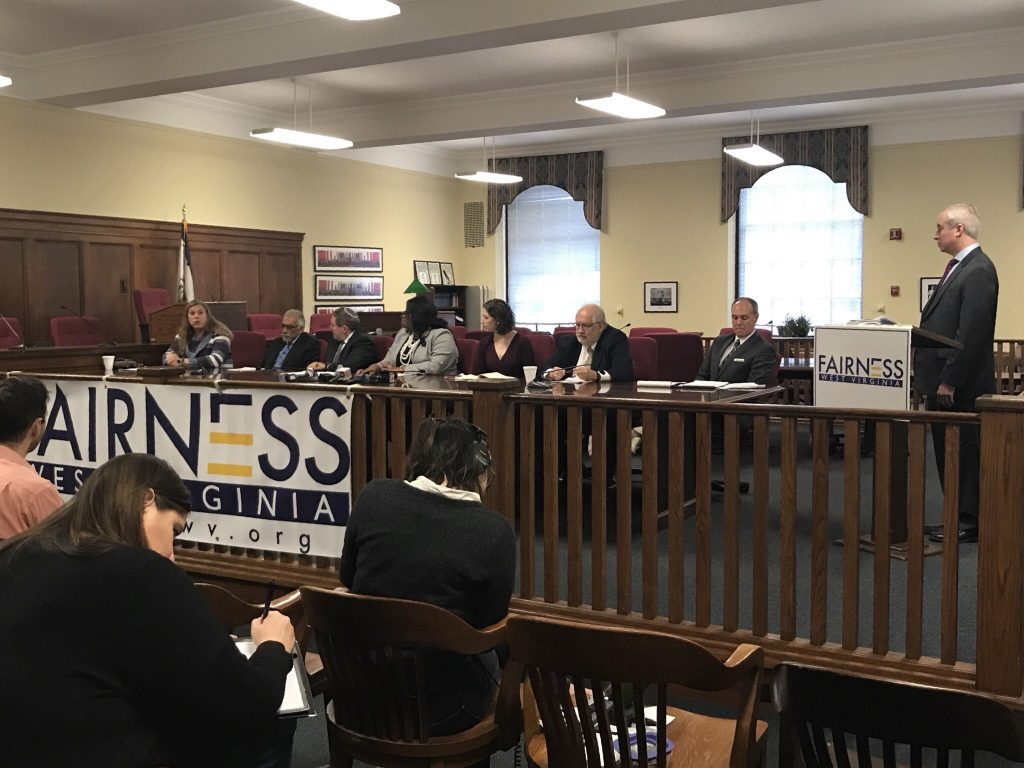 Senate President Mitch Carmichael participates in a panel discussion where LGBTQ West Virginians and their allies called on legislative leaders to pass the Fairness Act.

Questions should be directed to Jake Jarvis, communications manager, at 304-730-9458 or jake@fairnesswv.org. Limited photos of the event are available on request.