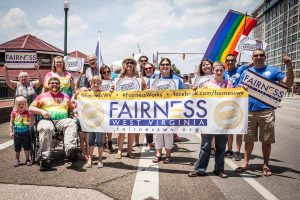 On Friday, lawmakers introduced Senate Bill 270, a common-sense piece of legislation called the Fairness Act. If adopted, it would add sexual orientation and gender identity to the state’s Human Rights Act and the Fair Housing Act. Here are five of the top reasons West Virginia should adopt this bill:

1. It’s currently legal in most of West Virginia to fire, evict, or deny someone service at a place of business just because they are a member of the LGBTQ community. It’s time to change that.

2. Legal discrimination sends the wrong signal to companies considering relocating here who need to recruit the best and brightest employees. It discourages and to young people from staying and helping our economy grow. Discrimination doesn’t pay!

3. Twelve of our state’s communities have banned discrimination on the basis of sexual orientation and gender identity. About 200,000 people now live under a nondiscrimination ordinance, but that’s only about 11 percent of our total state population. This patchwork of protections isn’t enough. All people — regardless of their zip code — should be protected. 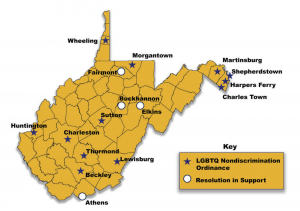 4. Our LGBTQ neighbors deserve to be treated with respect and dignity. The Golden Rule, found in nearly every world religion, instructs us to treat others as we wish to be treated. More than 100 faith leaders recently endorsed the Fairness Act.

5. West Virginia has lost more population than any other state in the last decade, and our economy has grown stagnant. This bill will help grow our economy and improve our image to the rest of the world Our state prides itself on our love of freedom, our sense of community, and our neighborliness. Let’s show the rest of the country our West Virginia values by becoming the 21st state to pass comprehensive nondiscrimination.

Show your support for the Fairness Act by coming to our annual lobby day on Jan. 23!

Contact your lawmaker today and tell them to support the #WVFairnessAct!