Doctors have known for years that conversion therapy doesn’t work. Every major medical association in the United States says the practice could be harmful to minors and should be banned. Now, doctors in West Virginia are stepping up to fight for LGBTQ children.

Read more about this bill and help us advocate for it!

“All of our children are born worthy of love for being exactly who they are,” said Andrew Schneider, executive director of Fairness West Virginia. “We should trust our doctors when they say that it’s time to ban this dangerous and discredited practice.”

Sixteen states have approved similar bans, ranging from liberal Massachusetts to conservative Utah, which just passed its own ban this month. States are banning conversion therapy because they know that if children are subjected to it, they will be at a higher risk of depression, anxiety, drug use, homelessness and suicide. 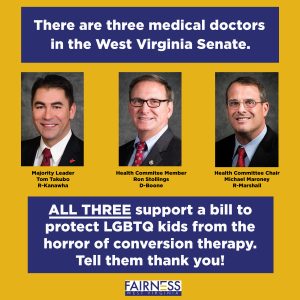 Jennifer Mills, president of the West Virginia Psychological Association, wrote in a letter supporting the Youth Mental Health Protection Act that sexual orientation is not a mental disorder that needs to be treated.

“The purpose of this bill is to protect children and adolescents from harmful, potentially deadly, and frankly fraudulent pseudo-therapeutic practices, specifically sexual orientation ‘conversion therapy,’” Mills wrote. “As psychologists, we pledge to provide evidence-based and ethically sound clinical treatment.”

Read more about this bill and help us advocate for it!

Maroney’s bill, Senate Bill 643, was introduced Wednesday morning. A number of delegates also support banning conversion therapy. Two identical bills, sponsored by a total of 16 delegates from across the aisle, were previously introduced in the house. Del. Margaret Staggers, an emergency medical doctor, is also a sponsor.

Conversion therapy is often an underground practice. Counselors don’t typically advertise it publicly, and it’s usually quietly forced on children and teenagers with the consent of their parents. The Youth Mental Health Protect Act recognizes how serious this problem is, and it would allow the state to revoke the license of a mental health provider who uses it on a minor.