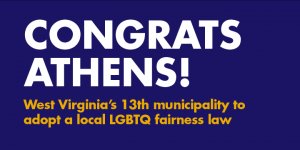 Nearly a year after Del. Eric Porterfield hinted he would drown his own children if they ever came out of the closet, a community in the heart of his district became the 13th municipality in West Virginia to adopt a local fairness ordinance for the LGBTQ community.

Members of the Athens town council voted Tuesday night to protect its community from discrimination on the basis of sexual orientation and gender identity. No council member objected to the ordinance, and every member of the public who spoke supported it.

“The people of Athens are stepping up to make sure their LGBTQ friends and neighbors can’t be fired or evicted just because of who they are or who they love,” said Andrew Schneider, executive director of Fairness West Virginia. “This is a huge win for our community. The lawmakers in Charleston should realize that if a small town in the heart of Del. Porterfield’s district is ready for fairness, the rest of the state is, too.”

Athens has a population of a little more than 900 people. Small towns are the backbone of West Virginia, and a growing number of them are stepping up for fairness.

Athens adopted the local fairness law as lawmakers are still weighing whether to act on Senate Bill 270, a proposal also known as the Fairness Act. This bill would ensure all LGBTQ people across the state, no matter their zip code, are protected from discrimination. Even with the addition of the people of Athens, less than 12 percent of West Virginians live somewhere with a local fairness law.

“All people deserve a fair shot in life,” Schneider said. “No one should be fired, evicted or denied public services because of who they love or who they are. Fairness West Virginia will continue to fight for the LGBTQ community until everyone is protected.”