In a memorandum decision earlier this summer, our state’s Supreme Court ruled that Circuit Court judges don’t have the authority to let a transgender person correct the gender listed on their birth certificate. Only one justice dissented from the opinion. The decision takes away the opportunity that many transgender people have already used for years.

“Essential documents like birth certificates should reflect who you are,” said Andrew Schneider, executive director of Fairness West Virginia. “This decision from the court is archaic and discriminatory, and it seeks to require transgender people to pretend to be something other than the gender they are. It exposes transgender Mountaineers to further harassment and discrimination.”

Some jobs require people to present birth certificates as part of the application process. Government agencies also frequently require a person to show their birth certificate when obtaining other documents — like a replacement for a lost social security card. If a transgender person from West Virginia is unable to correct their birth certificate, their life gets exponentially harder. An ID that has an incorrect gender listed outs that person as transgender every time they need to show it.

Transgender women are women and transgender men are men — no matter what the justices of our Supreme Court say.

The state of West Virginia already allows people to update their birth certificate for a variety of reasons, including when a child is adopted into a new family. Transgender people shouldn’t be denied that same opportunity. Contrary to popular belief, birth certificates are not scientific or medical documents. They are identifying documents that people use to verify they are who they say they are — much like a driver’s license. But some people don’t already have a driver’s license or social security card and might depend on a birth certificate as their only form of identification.

Although federal courts have intervened in the past to help transgender people correct their birth certificates, we can’t wait for that to happen. We need our lawmakers to commit to fixing this problem. Send your lawmaker a message below! 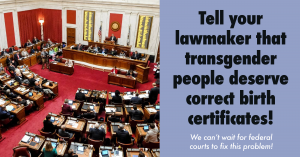