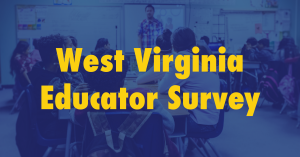 Over the course of four weeks, Fairness West Virginia asked educators across the Mountain State to take a short survey about how LGBTQ students are faring in school. More than 100 teachers from 22 different counties completed the survey.

“All students deserve to attend safe and supportive schools, and the results of this survey will help us ensure our educators have the tools to uplift their LGBTQ students,” said Andrew Schneider, executive director of Fairness West Virginia. “We’ve known for a long time that LGBTQ students face serious harassment and bullying from their peers, but this survey sheds new light on how few teachers are actually equipped to support these students.”

Seventy percent of teachers surveyed said they have never received training on how to support LGBTQ students. For the 30 percent of teachers who have received this kind of training, many said it is often included only briefly during annual training on responding to sexual harassment or assaults in school. Taking into account the results of this survey, Fairness West Virginia has three policy recommendations to improve the lives of LGBTQ students in our school system. These three recommendations are the foundations of creating safe and supportive schools for LGBTQ students.

1. Teacher Training — Provide all school employees, including educators and administration, with comprehensive professional development to better support LGBTQ students, including training on how to respond to anti-LGBTQ bullying
2. Transgender-Inclusive Policies — Implement policies in each county to support transgender students, including policies to allow them to use facilities and participate in activities that match their gender identity
3. Student Orgs — Ensure all middle and high schools students can access GSAs (gay-straight alliances) or other LGBTQ-focused student organizations

Interested in funding our work to make schools safer for LGBTQ students? We could use your support!

Please note: The survey results below include certain anti-LGBTQ slurs that may be upsetting to some readers.

We asked educators if they’ve heard anti-LGBTQ slurs in their school within the past year, including slurs like “faggot,” “dyke,” “sissy,” “fairy,” “tranny,” and so on. These kinds of slurs are particularly harmful to LGBTQ students and very disruptive to a learning environment.

These anti-LGBTQ slurs are a form of bullying, but just one form. Data from the Center for Disease Control sheds light on other specific types of bullying and harassment. Since 1991, the CDC has conducted a Youth Behavior Risk Survey every other year to measure behaviors that lead to illness, death, and disability among youth and young adults. The most recent results from that survey, taken in 2017 and released publicly the following year, paint a grim picture for lesbian, gay, and bisexual high school students in West Virginia (the survey results for West Virginia did not include separate categories for transgender or nonbinary youth).

According to that survey, about 40 percent of LGB high school students in West Virginia say they have been bullied at school, the 7th highest rate of all states that participated in the survey. Additionally, 30 percent of LGB high school students in our state have attempted suicide in the past year, about 14 percent said they skipped school out of fear for their safety and about 13 percent were “threatened or injured with a weapon on school property.”

The majority of teachers who took our survey (70 percent) said they have never received any kind of training from the state, county, or local officials on how to support LGBTQ students. In the comments section of the survey, several teachers expressed a desire for more of this kind of training. Earlier this year, Fairness West Virginia staff trained nearly 40 teachers across West Virginia on the foundations of understanding LGBTQ people. These training sessions are important because they allow teachers to better understand what it means to be LGBTQ, how to make their classrooms inclusive spaces, and how to address instances of bullying and harassment. Without inclusive schools and classroom environments, LGBTQ students will not be able to reach their full potential.

“A trans student of mine struggled to focus and stay motivated this year,” one teacher wrote. “He always did better when I intentionally affirmed his gender identity, which was an easy, obvious choice for me to make. He wanted to be seen for who he was.”

Interested in funding our work to make schools safer for LGBTQ students? We could use your support!

One hundred and twenty-nine teachers completed the survey, representing 22 different counties across the state. In order to complete the survey, respondents were required to use their official school email addresses to verify they are currently teachers in West Virginia. Users who did not submit correct and verifiable email addresses were excluded from the survey’s results. A strong majority of the survey respondents currently teach high school students, while the rest teach middle and elementary school students.