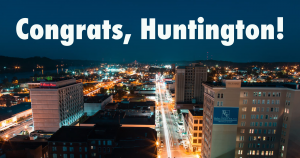 Huntington first achieved a perfect score on the Municipal Equality Index in 2019. HRC held a virtual event to recognize Huntington and two other cities with high scores. A recording of the virtual event can be viewed here.

“Huntington’s success should prove to everyone how quickly progress can be made,” said Andrew Schneider, executive director of Fairness West Virginia. “It’s score this year is more than double what it was a few years ago. I hope our entire state takes inspiration from this achievement. Our communities thrive when we commit ourselves to fully living the values we share. Promoting fairness for all people helps us live up to our state motto, ‘Mountaineers are always free.’”

The Municipal Equality Index is an annual measure of a municipality’s laws and policies that protect and support LGBTQ people. Seven West Virginia cities were scored in this year’s index.

Two municipalities, Lewisburg and Wheeling, improved their scores this year because they have openly LGBTQ people serving in elected or appointed roles. Rosemary Ketchum, the first openly transgender person elected to public office in West Virginia, became a city councilor in Wheeling earlier this year. 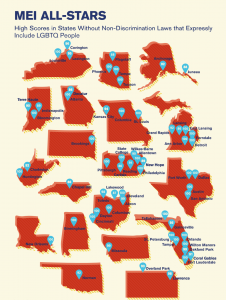 Both Huntington and Charleston were recognized as “All-Stars” this year, a designation for high-scoring cities in states that don’t have a statewide nondiscrimination law.

“Our cities and towns continue to make important strides toward ensuring that LGBTQ people feel safe to live, work and raise a family in our state,” Schneider said. “Our communities should feel proud of the progress we’ve made in a year, but we can’t stop now. All LGBTQ people — no matter their zip code — should be equally protected. Our state’s lawmakers can ensure everyone has equal protection and dignity under the law by passing the Fairness Act.”

The Fairness Act is a bipartisan proposal to protect LGBTQ people from discrimination in employment, housing and public spaces. Gov. Jim Justice announced earlier this year he supports the bill, and numerous legislative leaders from both parties also publicly support it.

Until a statewide law is in place, the burden of protecting our community falls to municipalities. Currently, 13 municipalities have adopted local fairness laws banning discrimination. This means that roughly 200,000 people, or about 11 percent of the state’s population, live somewhere with these protections.

“This patchwork of protections isn’t enough,” Schneider said. “An LGBTQ person can be protected from discrimination in one city, but then can be legally discriminated against just outside of city limits.”

A full list of the municipalities that were scored can be viewed online here, and the full report can be found here.

Fairness West Virginia is the statewide civil rights advocacy organization dedicated to fair treatment and civil rights for lesbian, gay, bisexual and transgender West Virginians. Our mission is to ensure LGBTQ people can be open, honest and safe at home, at work and in the community. We are open to everyone who believes in fundamental fairness.