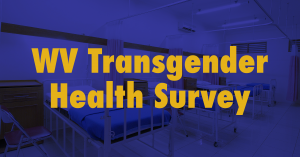 Fairness West Virginia, the state’s civil rights advocacy organization for LGBTQ people, released on Monday the results of its annual transgender health survey. The survey, conducted over several weeks in late summer and early autumn, asked transgender identifying individuals across the state about their experience with the health care system and discrimination they experienced.

Close to 45 percent of respondents said medical or mental health providers have discriminated against them, and 17 percent said they were outright refused care.

“It’s unconscionable that anyone can be turned away from getting the care they need in the middle of a pandemic, but that’s happening,” said Andrew Schneider. “Without laws to protect against discrimination like the Fairness Act, doctors and hospitals can continue to legally discriminate against LGBTQ people just because of who we are or who we love.”

Beyond being refused care, the results shed light on the stark reality of accessing health care for transgender people. Many still have to drive long hours to access the care they need, and providers continue to misgender patients too often.

The survey results show strong improvements in the experience of transgender people accessing care compared to last year’s survey. For example, 60 percent of respondents to 2019’s survey said providers intentionally misgendered them, whereas 36 percent said the same this year. We attribute part of the improvements to the Transgender Health Initiative, a program Fairness launched in 2019 to improve these statistics.

“For a long time, West Virginia has been a desert for trans-inclusive health care, but we’ve been working hard to change that,” Schneider said. “One of the keys to keeping young people from leaving our state is to ensure they can access the care they need when they need it. And the results are in — our Transgender Health Initiative is improving the lives of transgender and nonbinary people across this state. We’re expanding options for care and reducing discrimination.”

To fund this initiative and help us expand the program,
click here to support our work.

Fairness’ organizer, Natasha Stone, heads the project and is responsible for training providers on how to provide competent and compassionate care for transgender people. In February of this year, the initiative launched the first interactive Trans Health Guide for the state. Providers and clinics who have undergone training and vetting by Fairness staff can be included in the guide.

Of the survey respondents who knew about the guide, slightly more than 60 percent said they have referenced the guide while seeking care and 35 percent said it has helped them find a new provider. Two-thirds of respondents plan to use the guide when finding a provider in the future.

“The results of this survey show that our work is helping, but it’s not enough,” Stone said. “In order to truly improve the lives of transgender people living in our state, we need to change the culture of our health care system and continue decreasing barriers to accessing care.”

Members of the medical community can request free training from Fairness West Virginia by emailing training@fairnesswv.org.

From 2019 to 2020, most forms of discrimination that survey respondents experience decreased. Our initiative specifically trains providers on how to avoid misgendering patients and the importance of treating transgender patients with the same dignity and respect that cisgender patients receive. Survey respondents did report that slightly more providers were excessively rough compared to our 2019 survey.

“Seeking adequate help in this state currently means having the ability to travel,” one survey respondent wrote. “I have looked and southeastern West Virginia is bare of trans anything. The closest place I found to here that looks decent is in Roanoke, Virginia. I don’t have the ability to travel that far, so I am stuck here hopeful that I will one day find a local doctor with an open heart and mind. To say it’s discouraging is an understatement. We feel alone here.”

Discrimination isn’t just morally wrong — it leads to negative health outcomes. When providers don’t listen to their transgender patients or blame unrelated health concerns on their transition, providers can miss important information they might need to have a correct diagnosis. And when providers misgender transgender patients or otherwise create a combative relationship with their patients, those patients are less likely to continue seeking care.

One transgender man who responded to the survey shows how dangerous discrimination can be. “My gynecologist also once thought I was on testosterone because I am trans, even though I told her numerous times that I, at that time, wasn’t on it, and she had my medicine list,” he said. “It delayed my [polycystic ovary syndrome] diagnosis until I brought up my symptoms and I ended up almost getting type 2 diabetes since my PCOS comes with insulin resistance. I was prediabetic when it was caught.”

Unfortunately, too many forms of insurance have blanket exclusions on trans-inclusive health care. This means that insurance plans won’t cover care related to a transgender person’s identity. This often forces transgender patients to make a difficult choice: pay for care completely out of pocket, or don’t seek care at all. The care a transgender person receives as a part of their transition is often lifesaving.

Fairness West Virginia collected survey responses from transgender and nonbinary people who live in West Virginia over the course of several weeks in late summer and early fall. Although many respondents live in the state’s large metropolitan areas, people from 24 counties responded to the survey.