CHARLESTON, West Virginia — The Fairness Act was introduced in the West Virginia House of Delegates Tuesday with a bipartisan group of three Republican and three Democratic sponsors lining up to protect LGBTQ people from discrimination.

The Fairness Act is a bipartisan proposal to ensure no one faces discrimination in employment, housing or public spaces because of their sexual orientation or gender identity. Currently, 21 other states have adopted comprehensive discrimination protections.

“It’s time to ensure that all hardworking Mountaineers can live free from discrimination,” said Andrew Schneider, executive director of Fairness West Virginia. “No one should be fired, evicted or denied service at a public place because of who they are or who they love.” 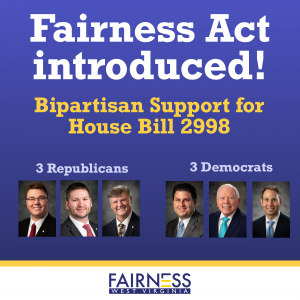 Gov. Jim Justice, the leader of the state’s Republican Party, previously said he will sign the Fairness Act into law if approved by the Legislature.

“Treating people fairly is a bipartisan issue,” Schneider said. “Recent polling shows us that 64 percent of West Virginians support laws like the Fairness Act. It’s no secret that major corporations are looking to locate in inclusive communities, and this bill will help us attract investors and stop young people from leaving our state with their talent and education.”

Fairness West Virginia anticipates more delegates will sign on as sponsors of House Bill 2998 in the coming days and weeks.

Because of a quirk with House rules that allow only a limited number of sponsors on a single bill, multiple versions of the Fairness Act are introduced every year to accommodate all of the delegates wishing to sponsor it. This year, additional versions of the bill have been introduced by Del. Danielle Walker, Del. Mike Pushkin, Del. Chad Lovejoy, Del. Kayla Young, Del. Lisa Zukoff, and Del. Evan Hansen.

Fairness West Virginia is the statewide civil rights advocacy organization dedicated to fair treatment and civil rights for lesbian, gay, bisexual, and transgender West Virginians. Our mission is to ensure LGBTQ people can be open, honest and safe at home, at work and in the community. We are open to everyone who believes in fundamental fairness.