CHARLESTON, West Virginia — The Youth Mental Health Protection Act, a proposal to ban the dangerous and discredited practice of conversion therapy, was introduced in the West Virginia House of Delegates Wednesday morning with bipartisan support. 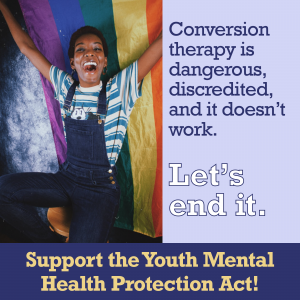 “All of West Virginia’s children deserve love and respect for who they are, and our state’s licensed therapists shouldn’t be in the business of trying to change gay teenagers,” said Andrew Schneider, executive director of Fairness West Virginia. “Conversion therapy is a dangerous and discredited practice that just doesn’t work. It leads to higher rates of depression and suicide attempts, and it’s time for us to ban it.”

The bill, House Bill 3033, was referred to the House Health and Human Resources Committee. The lead sponsor is Del. Erikka Storch, R-Ohio. An identical version of the bill, Senate Bill 598, was introduced in the Senate earlier in the week. Fairness West Virginia called on legislative leaders to add the bill to an upcoming committee agenda.

“Our state’s LGBTQ youth continue to experience some of the highest rates of depression and suicide attempts in the entire country, and conversion therapy only exacerbates the mental health crisis we’re in,” Schneider said. “The research has been crystal clear for many years now: being gay is not a medical or mental health condition that needs fixing. Conversion therapy is in fact medical malpractice.”

Fairness West Virginia expects more delegates will sign on as sponsors to the bill and its companion in the Senate in the coming days and weeks.

Use the tool below to quickly send an email to your lawmaker in support of banning conversion therapy!