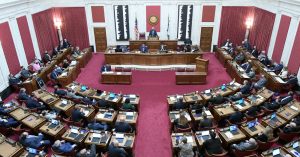 CHARLESTON, West Virginia — The West Virginia House of Delegates voted 78-20 Thursday to ban transgender athletes in middle and high school from participating in school sports that match their gender identity.

“This is a cruel bill that offers a solution in search of a problem,” said Andrew Schneider, executive director of Fairness West Virginia. “Sixteen other states and the NCAA allow transgender kids to fully participate in school sports without any issue. School sports are important. They teach our kids the value of discipline, teamwork, self-confidence and other essential life skills. No child should be denied that opportunity.”

Many trans youth already face an uphill battle in nearly every part of their lives — 84 percent of transgender youth feel unsafe at school, with 70 percent of those students avoiding bathrooms because they felt unsafe or uncomfortable, according to GLSEN’s 2019 survey. Nearly half of trans youth attempt suicide, and the trans community is increasingly the target of violence and harassment. This bill will further ostracize young transgender people from their peers.

“The West Virginia Chapter of the American Academy of Pediatrics opposes House Bill 3293. Our organization works toward all children and adolescents — regardless of gender identity or expression — receiving care to promote optimal physical, mental, and social well-being,” said Dr. Lisa Costello, president of the state’s chapter and vice president of the state medical association. “Any discrimination based on gender identity or expression damages the socioemotional health of children, families, and society. Transgender youth in West Virginia are at higher risk of suicide than their cisgender peers, and this bill will only further the discrimination transgender youth experience. We urge lawmakers to reject House Bill 3293.”

“I could not agree more with the American Academy of Pediatrics,” said Danny Scalise, executive director of the West Virginia State Medical Association. “Transgender children already face higher rates of suicide and depression. We oppose HB 3293 as it would further harm too many of West Virginia’s most vulnerable.”

“I think we can all agree that adolescence is a difficult time for many people,” said Brittainey Cooper, the social justice chair of the West Virginia School Psychologists Association. “It is rough even when questioning gender identity is never a concern. Transgender adolescents already struggle in ways that cisgender teens do not. Research has shown, year after year, that transgender adolescents are more prone to bullying, social and family rejection, and mental health concerns.”