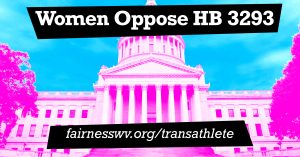 The organizations advocate for equal rights and protections for women in various ways. Their statement opposing the trans athlete ban comes on the 12th annual Transgender Day of Visibility.”

“On this Transgender Day of Visibility, it’s not only important for us to celebrate and uplift the trans and non-binary people in our life, but we must also recommit ourselves to fighting the discrimination they face,” said Andrew Schneider, executive director of Fairness West Virginia. “Trans women are women — period. And trans women are not a threat to cisgender women. Our lawmakers should listen to this strong coalition of women and reject House Bill 3293.”

The coalition held a discussion Wednesday at 6 p.m that was live streamed on Fairness West Virginia’s Facebook page. View the conversation below.

“House Bill 3293 is a discriminatory bill that will harm hundreds of transgender youth across our state, and it will send the unfortunate message to the rest of the world that West Virginia is not the welcoming place I know it to be,” said Margaret Chapman Pomponio, CEO of WV FREE. “We stand firmly against this bill. Trans women and girls have been an integral part of the fight for gender liberation. On this Transgender Day of Visibility, I encourage everyone who wants to support women to join us in the fight against this bill.”

“The marginalization of student athletes who are transgender is rooted in the same kind of misogyny, gender discrimination, and stereotyping that has held back cisgender women athletes for decades,” said Alisa Clements, the WV Director of Public Affairs at Planned Parenthood South Athlantic. “For many students, athletics are a significant part of their life and help them thrive in school. All kids have the right to participate in sports consistent with who they are. We will continue to fight against this harmful bill.”

“Participation in sport and sporting activities offers physical, mental, and social benefits to our children. We should be using sports to teach our youth about acceptance, teamwork, and work ethic rather than exclusion based on fear,” said Cheyenne Luzynski, of the West Virginia chapter of the National Organization of Women. “There is a long history of sex and gender discrimination in athletics and the further marginalization of trans student athletes is rooted in this same harmful and bigoted rhetoric.  As part of the largest feminist grassroots organization in the country, WVNOW strongly opposes HB 3293 as we believe all West Virginia children should have the right and opportunity to fully participate and engage in their childhood — regardless of how politicians view their sex or gender identity.”

“Time after time, we have seen the LGBTQ community portrayed as a grave threat to others and time after time it has proven to be nothing but scare tactics from bigots,” the ACLU of West Virginia said in a statement. “Now we’re told that trans girls are a grave threat to cisgender girls in sports. Enough with this harmful rhetoric. Trans girls ARE girls. Trans women ARE women. It’s time to let kids live their lives and focus on actual problems facing our state instead of rushing through a bill that is clearly unlawful.”

“Women’s March West Virginia is firmly against House Bill 3293. Transgender women and girls deserve to be treated with respect and dignity, and this bill falls short of that,” said Carol Workman, with Women’s March West Virginia. “It will also invite unnecessary scrutiny into the appearance of girls across our state. Bodies come in all shapes and sizes, and no young girl — transgender or not — should be scrutinized or judged for her appearance.”

“This bill is fearmongering, plain and simple. Like the bathroom bills that we saw throughout the country a few years ago, this is just the newest way to attack trans people,” said Natasha Stone, the organizer for Fairness West Virginia. “Trans kids aren’t a danger. House Bill 3293 is a solution in search of a problem. We should absolutely protect our children, and that means we need to do everything in our power to protect trans kids, who are some of the most vulnerable kids in West Virginia.”