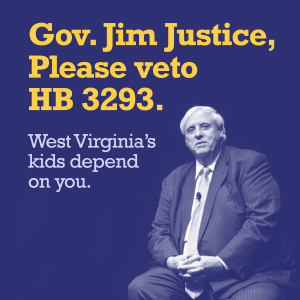 “Our fight is not over,” said Andrew Schneider, executive director of Fairness West Virginia. “We will continue fighting to defend transgender kids across West Virginia as long as it takes to defeat this extremely harmful bill. It’s time for Gov. Jim Justice to join the numerous Republicans across the country to speak out against these targeted attacks. He needs to veto this bill as soon as it makes its way to his desk.”

Fairness West Virginia launched a new campaign Thursday to ask the Governor to veto the bill hours after the Senate approved it. Members of the public are encouraged to use an online form to email and call the Governor’s office and tell him to veto the bill.

“This was a bad bill from the start, but it’s been made even worse in recent days,” Schneider said. “This bill now essentially allows any member of the public to challenge an athlete’s gender in the courts, and it was expanded to ban transgender athletes from participating at the collegiate level. If this bill becomes law, it will be a legal and financial disaster for our state.”

Although both chambers of the Legislature have voted in favor of the bill, it will not immediately head to Gov. Jim Justice’s desk.

Since the Senate amended the bill, it must head back to the House of Delegates. Delegates will vote on whether to accept or reject the changes the Senate made. If they reject the changes, a small group of Senators and Delegates may form a conference committee to find a compromise on both versions of the bill. That conference committee would be tasked with deciding which version of the bill to support, or suggest a compromise between the two. If Delegates accept the Senate’s changes, or vice versa, only then would it head to the Governor’s desk.

The legislative session ends at midnight on Saturday. Bills that are not passed by that time die and do not become law.

“Our leaders should let this bill die and let transgender West Virginians move on,” Schneider said.

Fairness West Virginia is the statewide civil rights advocacy organization dedicated to fair treatment and civil rights for lesbian, gay, bisexual, and transgender West Virginians. Our mission is to ensure LGBTQ people can be open, honest and safe at home, at work and in the community. We are open to everyone who believes in fundamental fairness.