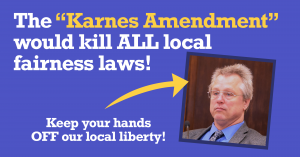 We urgently need your help to defeat a plan that would strip thousands of LGBTQ people across West Virginia of protections against discrimination in employment, housing and public spaces. Sen. Robert Karnes’ is planning to sneak new language into House Bill 2500 that would prevent cities from enacting or enforcing local fairness laws. Contact Senators and tell them to vote against the Karnes amendment to abolish local liberty now! 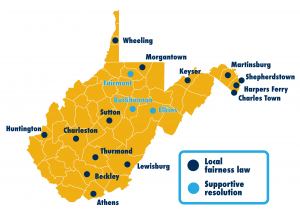 Cities and towns that have adopted local fairness laws.

As you might know, West Virginia has yet to adopt the Fairness Act to protect LGBTQ people from discrimination. Several cities and towns across the state, including Charleston, Huntington, and Morgantown, have adopted their own local fairness laws. The city of Keyser, a small community in the eastern panhandle, adopted this law right before the start of the session. These local laws aren’t enough, but they’re the best chance we have to protect our community until the Legislature finally steps up.

Not only will this amendment hurt the communities who have existing local fairness laws, it will also take away local control in the future. Local government is where democracy is at its purest, and the Karnes amendment will prevent local leaders from doing what their citizens elected them to do. This amendment would kill our campaign to help more cities adopt these crucial laws.