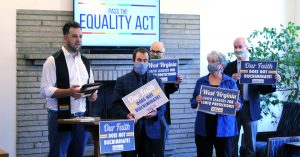 West Virginia Faith Leaders Speak Out in Support of the Equality Act, Urge Sens. Manchin and Capito to Protect LGBTQ People from Discrimination

WEST VIRGINIA – Today, more than 100 faith leaders across West Virginia are calling on Sens. Joe Manchin and Shelley Moore Capito to support the passage of the Equality Act — federal legislation that would modernize and improve our nation’s civil rights laws by including explicit, permanent protections for LGBTQ people, as well as women, people of color, and people of all faiths.

Faith voices convened on Wednesday at First Presbyterian Church in Morgantown and at the offices of Fairness West Virginia on Thursday in Charleston to hold events featuring top faith voices across the state. Faith leaders from all corners of West Virginia have also signed an open letter endorsing the Equality Act and outlining why their senators must support its passage, representing faith communities from more than 30 cities.

“LGBTQ people are our friends, neighbors, family and coworkers. We are all God’s children and we all deserve to go about our daily lives without the fear of discrimination,” the faith leaders wrote in the letter. “Despite our diversity of faith traditions and backgrounds, we share the fundamental belief that we are all called to treat others with the respect we desire for ourselves.”

“In the Bible’s creation narratives, God creates a broad spectrum — nothing God creates falls into a pure binary, human beings included,” said Rev. Cindy Briggs-Biondi, pastor at St. Mark’s United Methodist Church in Charleston. “We are called to celebrate the goodness of all humanity created in the image of God. Passing the Equality Act is one small way of recognizing and protecting the divine image in each person.”

“My faith teaches me that every single person is a beloved child of God, worthy of being treated with equal fairness, dignity, and respect. LGBTQ people deserve a policy that ensures they are equally protected under the laws at the highest level of our government,” said Pastor Zac Morton, pastor at First Presbyterian Church. “The Equality Act, though, is not just about being fair to everyone. It is an act of common good that sends the message that LGBTQ people are a vital and beloved part of our society and our communities all across this land. It declares that we, as a people, take seriously our responsibility to ensure that nobody can impinge on their fundamental right to life, liberty, and pursuit of happiness just because of who they are and who they love. The Equality Act fulfills both the highest ideals of my faith and the highest values of our nation, and the time has come for its passage.”

“Our faith teaches us that all people are created with sacred dignity and worth – and that we must respect and love others not only in our words but also through our actions and laws. In a nation that does not protect LGBTQ people from discrimination, it is impossible for us to live into these universal truths that transcend our faith traditions,” said Pastor Bob Roberts, Morgantown’s First Christian Church, Disciples of Christ. “That’s why I am called to support and advocate for the Equality Act, which would ensure that no LGBTQ person is left vulnerable to discrimination in any area of life. I am honored to unite with faith leaders across West Virginia in urging our Senators to pass this vital legislation – because I want all who come through the doors of my church to feel welcomed with the love of Christ.”

“Ideally, there would be no need for the Equality Act because people would treat all their neighbors the same,” said Rev. Valerie Gittings, of Fairmont’s First Baptist Church. “Unfortunately, discrimination against our LGBTQ brothers and sisters persists. The Equality Act will be an important step in moving all of us forward, into a place of justice and shalom.”

In endorsing the Equality Act, the faith leaders are joining the majority of Americans, hundreds of members of Congress, and more than 600 organizations, including civil rights, education, health care, and faith-based organizations. More than 400 major U.S. businesses – including dozens of Fortune 500 companies – and more than 60 business associations have also publicly supported the federal legislation.

Currently, 29 states — including West Virginia — do not have laws that explicitly protect LGBTQ people from discrimination. Without the Equality Act, LGBTQ people remain vulnerable to being evicted from their homes, kicked out of a business that’s open to the public, denied health care, removed from a jury, or denied government services in a majority of states simply because of who they are.

With nearly two-thirds of LGBTQ people having reported experiencing discrimination in their personal lives, the Equality Act would level the playing field for everyone, guaranteeing that LGBTQ people are extended the same federal anti-discrimination protections that others in the United States have enjoyed for decades.

The Equality Act would also extend protections to millions of women who aren’t covered under some existing federal anti-discrimination laws and expand the public spaces and services that can’t discriminate against anyone based on race, national origin, or religion.

Fairness West Virginia is the statewide civil rights advocacy organization dedicated to fair treatment and civil rights for lesbian, gay, bisexual, transgender, and queer West Virginians. Our mission is to ensure LGBTQ people can be open, honest and safe at home, at work, and in the community. We are open to everyone who believes in fundamental fairness.