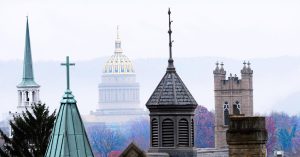 CHARLESTON, West Virginia — A coalition of faith leaders across Charleston joined forced Friday to support a proposal before their city council to ban the abusive practice of conversion therapy.

Members of city council will vote on whether to join more than 20 other states and 70 other municipalities in banning this practice. The coalition sent a joint letter to members of council supporting the ban and noted that the proposal will not impact their freedom of religion and ability to continue leading their respective congregations.

“As faith leaders, we believe we must do everything in our power to make sure that West Virginia is a safe place to live, work, and raise a family for all people, including members of the LGBTQ community,” they wrote. “Unfortunately, the dangerous and discredited practice of conversion therapy is still legally allowed to flourish in our state.”

Click here to view a copy of the letter.

Every major medical association in West Virginia — and every medical association nationwide — has condemned conversion therapy for children. Conversion therapy is a pseudoscientific practice where a medical provider attempts to change someone’s sexual orientation or gender identity. It’s an outdated practice that science has shown doesn’t work and can lead to long-term negative health outcomes

“We recognize the harm caused to our community when our community continues to allow conversion therapy to continue unchecked. Children who are subjected to the pseudoscientific practice of conversion therapy are more likely to experience depression, anxiety, and even attempt suicide,” the leaders wrote. “We feel it is important for us, as representatives of the Kanawha Valley’s faith community, to speak up and stand in solidarity with members of the LGBTQ community.”