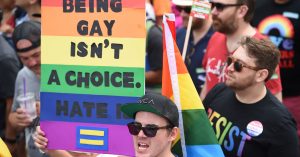 The City of Charleston may well become the first city in West Virginia to ban the dangerous and discredited practice of conversion therapy on minors. Conversion therapy is a pseudoscientific practice where a medical provider attempts to change someone’s sexual orientation or gender identity. It’s an abusive practice that science has shown doesn’t work and can lead to long-term negative health outcomes.

All of Charleston’s children deserve love and respect for who they are, and no one should be in the business of trying to shame or humiliate teenagers out of being gay. Every major medical association agrees with us. Children who are forced into this dangerous practice are more likely to experience depression, self-harm, and even suicide.

Use the tool below to email City Council members and tell them to ban this practice! Members of the Ordinance and Rules committee met this week and voted to approve the bill. It now heads to the full council for a vote. Can you help us advocate for it?