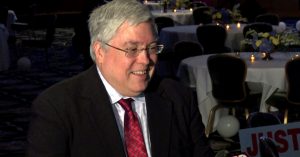 CHARLESTON, West Virginia — Attorney General Patrick Morrisey this week joined a group of other Republican attorneys general across the country to file a federal lawsuit seeking to roll back protections for LGBTQ West Virginians.

The group of 20 attorneys general filed the suit in a Tennessee federal court on Monday. They seek to stop Pres. Joe Biden’s administration from protecting LGBTQ people from discrimination in various areas of life.

“Once again, Attorney General Patrick Morrisey dragged our state into an expensive lawsuit that only seeks to harm the very West Virginians he swore to protect,” said Andrew Schneider, executive director of Fairness West Virginia. “All Mountaineers deserve to be treated with dignity and respect, and this lawsuit can only harm all of our LGBTQ friends, neighbors, and colleagues who just want to live free from discrimination.”

The decision means that no employer can unfairly fire someone just because of their sexual orientation or gender identity. The decision, written by a conservative Trump-appointed justice, has helped countless West Virginians. Morrisey’s lawsuit seeks to stop the federal government from fully implementing the decision in regards to other areas of federal law.

“I believe the courts will continue to build on the landmark Bostock ruling to further protect LGBTQ people, but in the meantime, Patrick Morrisey needs to remember his job is to protect all West Virginians,” Schneider said.