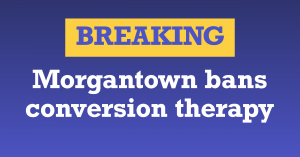 MORGANTOWN, West Virginia — Members of the Morgantown city council voted unanimously Tuesday night to become the second city in West Virginia that bans the practice of conversion therapy for minors.

“All of Morgantown’s children deserve love and respect for who they are, and no one should be in the business of trying to shame or humiliate teenagers out of being LGBTQ,” said Andrew Schneider, executive director of Fairness West Virginia. “Morgantown’s medical and faith communities came out strongly in support of this bill to ban the dangerous and discredited practice of conversion therapy, and I appreciate members of city council for bravely adopting it.”

A 2019 report from UCLA’s Williams Institute estimates that 700,000 people across the country have been subjected to conversion therapy. Studies have shown that victims of conversion therapy are 92 percent more likely to have thoughts of suicide.

That bill, called the Youth Mental Health Protection Act, is a statewide bipartisan proposal to stop licensed mental health providers from practicing conversion therapy. It would strip practitioners of their licenses if they fail to comply with the law. Cities like Charleston are unable to remove someone’s professional license, though.

“The passing of the Morgantown Human Rights Commission’s Ordinance to Prohibit Conversion Therapy is a victory for equality and acceptance with the Morgantown LGBTQ+ community,” said Ash Orr, chair of the commission. “Members of our community can now begin to heal and rest knowing that our city is protecting those most vulnerable to this terrible practice. Thanks to the hard work of the LGBTQ+ community members and leaders, our allies, the Morgantown Human Rights Commission, the City of Morgantown, and Fairness West Virginia, we can now work towards unity.