CHARLESTON, West Virginia — A longtime member of West Virginia’s Air National Guard filed a lawsuit alleging she has been the victim of ongoing discrimination because of her sexual orientation and gender expression.

Supervisors told Kristin Kingrey, a lesbian and a 14-year member of the guard, that her career would suffer unless she began wearing makeup and grew her hair longer, according to court documents. Kingrey filed the lawsuit in federal court in November. 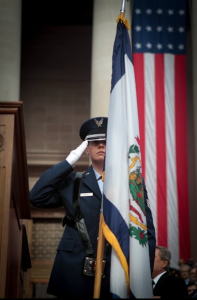 “It was just wrong. My outward appearance has nothing to do with my work ethic, with who I am as a person or with my character,” Kingrey said. “When the comment was made, I was very confused as to why that even mattered.”

A copy of Kingrey’s complaint can be read here. Kingrey is being represented by Hissam Forman Donovan Ritchie PLLC, based in Charleston.

Kingrey’s complaint alleges that leaders in West Virginia’s National Guard violated Title VII of the Civil Rights Act, and retaliated against her for filing an earlier complaint with the Equal Employment Opportunity Commission.

The harassment went so far that Kingrey was forced to try on a woman’s uniform “to confirm that none of the women’s sizes would fit [her],” according to the complaint.

“No one should have to go through the kind of harassment and discrimination Technical Sergeant Kingrey faced over the years,” said Andrew Schneider, executive director of Fairness West Virginia. “This is someone who has devoted her life to serving her country and her state, and this is how she’s treated? We’re better than this. For all of the lawmakers who say discrimination isn’t a problem any more — here’s proof it is.”

In June of 2020, the Supreme Court of the United States ruled that existing federal law which prohibits discrimination in employment based on an employee’s sex also protects LGBTQ employees. This means that employees across the country are protected from discrimination based on their sexual orientation or gender identity.

Despite this positive ruling, LGBTQ people face a patchwork of protections against discrimination. West Virginia is one of 29 states with no state law to ban discrimination in employment, housing or public spaces.

“Kristin Kingrey’s story goes to show that discrimination is still a major problem in West Virginia,” Schneider said. “If respected members of the National Guard can face this kind of harassment, what happens to other LGBTQ people across our state? It’s time for our leaders to stop sitting on their hands and to act. It’s time for West Virginia to pass the Fairness Act and for Congress to pass the Equality Act.”

The Fairness Act is a bipartisan proposal that would update West Virginia’s human rights law to include explicit protections for LGBTQ people living in the Mountain State. A similar bill, known as the Equality Act, would offer similar protections to LGBTQ people across the country. The U.S. House of Representatives have already approved the Equality Act, but it has not yet been brought up for a vote in the U.S. Senate.