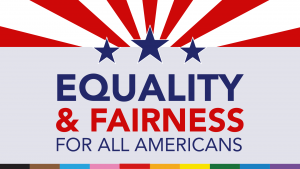 CHARLESTON, West Virginia — Today, Fairness West VIrginia joined the Equality and Fairness for All Americans Coalition as a founding member to advance federal protections for LGBTQ Americans in employment, housing, credit, education, jury service, and public accommodations.  The nationwide coalition is composed of bipartisan and diverse stakeholders from the LGBTQ, faith and business communities.

The Coalition aims to end the partisan gridlock that has stalled equality efforts in Congress. The Coalition’s goal is to gain bipartisan support for federal legislation that can unite all Americans around our nation’s core values of freedom, fairness, and opportunity to make lasting and impactful change.

“The model we’re supporting has been successful across the country — and we believe reflects the only chance before the 2022 election, and perhaps in a generation —  to advance protections for LGTBQ West Virginians and millions of other Americans in critical aspects of daily life,” said Andrew Schneider, executive director of Fairness West Virginia.

Support for LGBTQ non-discrimination protections has continued to grow in recent years across religious and political affiliations. Over 94 percent of Fortune 500 companies have non-discrimination policies that include gender identity and/or sexual orientation. Additionally, a 2020 poll from the nonpartisan Public Religion Research Institute found that 76 percent of Americans favor laws that would prohibit discrimination based on sexual orientation and gender identity in employment, housing, and public spaces.

A November 2021 poll conducted by Norman Analytics and Research with Mark Blankenship Enterprises found that 81 percent of West Virginia residents support nondiscrimination protections for LGBTQ people. Three out of five voters, 62% in the poll, said that making non-discrimination policies a priority would help the state’s economy grow and compete with neighboring states.

“We believe there is a path forward for equality and fairness for all Americans through dialogue, collaboration and compromise, which is why we were proud to join the Coalition,” Schneider said. “We have a once in a generation opportunity to pass landmark legislation within the next year to bring federal protections and opportunity to millions of Americans.”

Last year’s historic Supreme Court decision in Bostock v. Clayton County Georgia brought federal protections to LGBTQ Americans in employment for businesses over fifteen employees. However, LGBTQ Americans do not have federal protections in housing or public accommodations, meaning it is not illegal to deny someone service or housing based on their sexual orientation or gender identity. Currently only 21 states, Washington D.C., and 330 cities and counties have non-discrimination laws that includes protections based on sexual orientation and gender identity, leaving millions of Americans vulnerable to harassment and discrimination.

The coalition supports legislation modeled after multiple states and municipalities that protects LGBTQ people in employment, housing and public accommodations. In addition, the coalition supports lowering the employment threshold for protections from 15 to zero, which would bring federal protections to millions more Americans. The Coalition is also seeking a ban on the harmful practice of conversion therapy, which would save countless LGBTQ lives.

The Equality and Fairness for All Coalition supports:

“People of faith are LGBTQ and LGBTQ people are people of faith. The principles supported by the coalition reflect this, and are the results of years of profound dialogue between the faith and LGBTQ community. This is not an either-or scenario, but rather a unique opportunity to come together in a united approach to do what is right on behalf of all Americans,” said Rev. Marian Edmonds-Allen, Executive Director, PARITY.

“Equality and fairness are not red or blue issues – they’re American issues. All hard-working people, including those who are LGBTQ, want to do their jobs and provide for their families. LGBTQ people want the same thing as everyone else — the freedom to work hard, access basic services, and take care of themselves and their loved ones without fear of discrimination. It’s time to advance federal protections that guarantee these rights,” said Tyler Deaton, Senior Advisor of American Unity Fund.

Learn more about the Equality and Fairness for All Coalition and join the effort at: EqualityandFairness.com