Tell lawmakers to VOTE NO
on House Bill 2232!

Members of WV’s House Committee on Political Subdivisions approved a bill this week that would put important protections for thousands of LGBTQ people across the state in jeopardy. House Bill 2232 would force a city to hold an expensive, special municipal election to recall any city ordinance if only 15 percent of voters sign a petition. The bill is now heading to the House Judiciary Committee — our last chance to stop it from coming to the floor for a vote.

Since the state Legislature has refused to adopt the Fairness Act, West Virginians across the state have stepped up to combat discrimination in their communities. Fifteen municipalities have adopted local fairness laws that ban anti-LGBTQ discrimination in employment, housing, and public spaces. This bill would put ALL of the 15 local fairness laws in IMMEDIATE JEOPARDY! 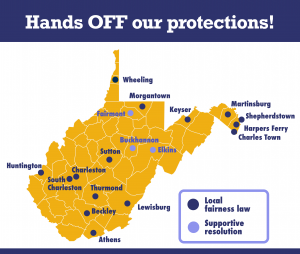 It would also have a chilling effect on future cities from even considering these protections out of fear of facing an expensive, divisive referendum. To show you how ridiculous that would be, let’s look at the town of Athens, the town in the heart of Del. Eric Porterfield’s district that became the 13th municipality to adopt a local fairness law. If these referendum provisions were adopted, as few as 57 people could have forced the town to hold a special election to decide whether LGBTQ discrimination should remain illegal. And we know that voter turnout is lower in these kinds of off-year municipal elections.

Allowing A MINORITY of eligible voters to undo laws passed by elected leaders undermines faith in our process.

New data out last week from conservative pollsters Norman Analytics and Research with Mark Blankenship Enterprises shows that 81 percent of West Virginians support protecting LGBTQ people from discrimination. Even though these protections are overwhelmingly popular, a small but vocal group of citizens could force their city’s hand and put any ordinance up for a recall.

Contact the Chairman of the House Judiciary Committee right now and tell him to keep HB 2232 OFF the agenda. Use the script below to call him, then scroll down to quickly email him in less than 1 minute. 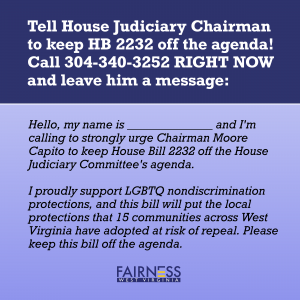