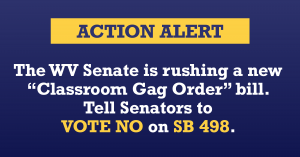 Our fight against the “Classroom Gag Order” isn’t over yet!

On Friday, we scored a major victory when members of the House Judiciary Committee killed House Bill 4011, the “Classroom Gag Order.” Instead of approving the bill, lawmakers decided to study the issue over the coming months. This was a major win.

But Monday afternoon, the Senate started rushing through its own version of this bill. The committee put forth a new version of the bill, something known as a “committee substitute.” This new language wasn’t made available to the public, but an out-of-state lobbyist funded by the Koch brothers told lawmakers he had the new language for three hours before the meeting.

The bills are usually called “Anti-Stereotyping Acts,” but that name is deceptive. The goal of these bills are to discourage educators and college professors from having important conversations about our country’s history of racism and sexism. Instead of rushing through this bill at the last minute by any means necessary, the Senate should allow the House to continue studying the issue.

Can you email WV Senators right now and tell them to VOTE NO on this bad bill? Use the form below to email them in less than 1 minute.