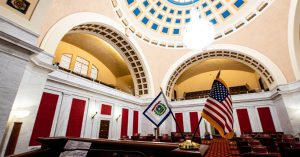 CHARLESTON, West Virginia — Once again, West Virginia lawmakers caved to anti-gay extremists and refused to consider any bills that protect LGBTQ people from discrimination or harassment. Our organization puts forward a slate of bills each year to improve the lives of LGBTQ people. These bills are all bipartisan, commonsense solutions to the real problems facing our community.

Unfortunately, leaders in the state Legislature refused to even debate the proposals.

“It’s frustrating that many of our lawmakers are more concerned with fixing problems that don’t exist than confronting the real issues West Virginians are facing,” said Andrew Schneider, executive director of Fairness West Virginia. “We had a chance to make some real progress with these bills, but instead, our lawmakers are more concerned with pushing a Classroom Gag Order to scare educators out of teaching American history. It’s shameful.”

Wednesday was an important deadline for these bills. That day is typically called “crossover” day, because legislative rules list it as the final day to pass a bill out of one chamber in order for it to be considered in the other chamber.

“LGBTQ people who live in West Virginia are resilient, and we will continue fighting for these basic protections for as long as it takes,” Schneider said.

Neither the House of Delegates or the state Senate allowed a vote on any of the following bills:

At the heart of this bill is a belief that all people — all West Virginians — deserve to be treated fairly with dignity and respect. It’s about treating other people the way that we want to be treated. This bill would update our state’s existing human rights laws to ensure LGBTQ people are able to live free from discrimination in employment, housing, and public spaces. This means landlords couldn’t evict someone for being transgender, and restaurants couldn’t refuse to serve someone just because of who they are or who they love.

LGBTQ people routinely are listed by the FBI as some of the most common victims of crime motivated by hate. Data released by the FBI in August of last year showed hate crimes against transgender people rose sharply: from 186 incidents in 2019 to 232 in 2020, a nearly 25 percent increase. But hate crimes don’t just affect individuals. These attacks instill fear in the entire community. Angel’s Law would stress restorative justice, which allows a judge to sentence a perpetrator to work within the community they have wronged in lieu of additional jail time. Prison will not make a more empathetic person. We want to stop the cycle of hate and reintegrate the person as a productive, empathetic member of society.

No one should be in the business of trying to shame or humiliate young LGBTQ people out of being who they really are. Unfortunately, that’s exactly what’s happening across our state. West Virginia state law allows for an outdated and debunked practice called conversion therapy. This is a pseudoscientific practice that every major medical association opposes. Essentially, conversion therapy is a legal form of child abuse that subjects vulnerable, young LGBTQ people to humiliation and shame under the guise of “therapy.” The victims of this practice are at significantly higher risk of suicide and depression, and the trauma can follow them for many years. Conversion therapy is already banned in 25 other states.The Youth Mental Health Protection Act would stop this horrific practice and strip away the license of any mental health practitioner who engages in this abuse.

Accurate IDs for All

Every member of our community deserves the right to ID documents that reflect the truth of who they really are. Unfortunately, members of the West Virginia Supreme Court recently ruled that transgender people cannot correct the gender listed on their birth certificate. This bill, supported and developed by transgender activists, would ensure that every Mountaineer can access the correct ID documents that they need. It would also allow for a gender-neutral option on the most common forms of IDs.