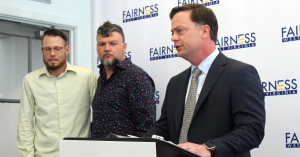 After calling him a “faggot,” the Spirit Halloween manager followed the gay man out of the store, took off his shirt, and chased him across the parking lot while threatening to fight him.

Since the incident in October of last year, the victim, Trevor Anderson, has been riddled with fear and anxiety. The complaint was filed in Kanawha County Circuit Court, and a copy of it can be found here.

“Incidents like this don’t just affect the victim. They also instill fear in members of the entire LGBTQ community,” said Andrew Schneider, executive director of Fairness West Virginia. “The truth is, discrimination is a real problem in our state, and that’s why it’s so important that we have laws on the books to protect people like Trevor. We need our leaders at the Legislature and in Congress to take this seriously. No one should have to experience what Trevor did. No one should live in fear.”

The lawsuit also includes a claim of civil assault and alleges that Spirit Halloween and its employee intentionally inflicted emotional distress on Anderson.

“Things have got to change,” Anderson said. “Discrimination has got to stop. I want my story to help make things better for everyone, but especially for the LGBTQ community. Everyone, no matter who they are or who they love, everyone should feel safe in the community that they live in.”

For Trevor, the fear he felt that day never completely went away. There were times he avoided going out in public because the anxiety he felt when he did was just too much to handle.

“Since that day, I’ve been looking over my shoulder,” Anderson said. “There have been times where I didn’t even want to run errands or go out in public — to work, even —  because the anxiety of leaving the safety of my house is too much to handle.”

Ben Salango is the attorney handling the case. He has generously donated his time to Fairness WV to prepare this case. Salango is the founder of Salango Law, LLC, a Charleston firm. Seven years ago, he filed one of the first civil cases in West Virginia to fight against discrimination toward the LGBTQ community. He has experience bringing one of the first LGBTQ discrimination cases under the local fairness law adopted by Charleston.

“Whether its at work, applying for jobs or simply exchanging an item at a store, our friends in the LGBTQ community face intolerable discrimination,” Salango said. “Spirit Halloween corporate headquarters is well aware of this incident. However, to date, there has been no apology for the outrageous and discriminatory actions of its manager. Spirit Halloween left Mr. Anderson with no alternative but to file a lawsuit.”