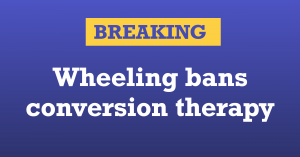 Wheeling, West Virginia — Members of the Wheeling city council voted 4-3 Tuesday to become the third city in West Virginia that bans the practice of conversion therapy for minors.

“All of Wheeling’s children deserve love and respect for who they are, and no one should be in the business of trying to shame or humiliate teenagers out of being LGBTQ,” said Andrew Schneider, executive director of Fairness West Virginia. “No one should be profiting off of child abuse.”

Researchers from UCLA’s Williams Institute report that at least 68,000 LGBTQ people live in West Virginia, and that about 7 percent of LGBTQ people are victims of conversion therapy. That means nearly 4,800 West Virginians, perhaps even more, have been subjected to this abuse. Studies have shown that victims of conversion therapy are 92 percent more likely to have thoughts of suicide. 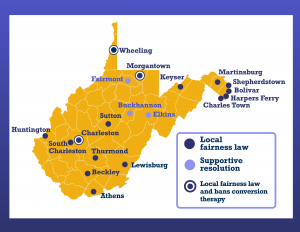 These three local ordinances are similar to legislation Fairness West Virginia sponsors at the Legislature. That bill, called the Youth Mental Health Protection Act, is a statewide bipartisan proposal to stop licensed mental health providers from practicing conversion therapy. It would strip practitioners of their licenses if they fail to comply with the law. Unlike the Youth Mental Health Protection Act, local ordinances that ban conversion therapy don’t affect a provider’s license to practice in the state.