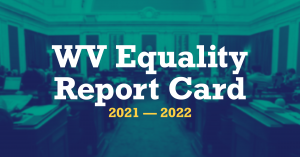 The WV Equality Report Card tracks how lawmakers voted on several anti-LGBTQ bills proposed at the Legislature since the beginning of 2021. Failure is defined by a lawmaker who exclusively votes in favor of these bills.

“This should be a wake-up call for all Mountaineers,” said Andrew Schneider, executive director of Fairness West Virginia. “Fairness and decency are on the ballot this November. The attacks on LGBTQ people are only going to increase until voters educate themselves and rally behind the leaders who believe in a state that welcomes everyone.”

Three-fourths of all Delegates and about half of all Senators earned failing marks. Only 14 percent of lawmakers in either chamber voted against all of these discriminatory bills.

“It’s no wonder young people are fleeing our state so quickly,” Schneider said. “Clearly the attacks on LGBTQ people aren’t helping any of us. Too many kids decide to leave Appalachia to find a better job or a more welcoming community. Meanwhile, our lawmakers spend their time drafting bills to ban rainbows from school.”

The WV Equality Report Card can be found on Fairness West Virginia’s online election center. Members of the community are encouraged to use the center and all of its tools before heading to the polls. Visitors can research candidates, find their polling location, and review the state’s voter ID requirements.