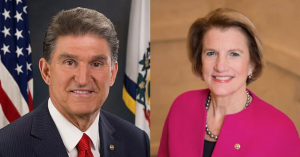 Capito, Manchin vote in favor of the Respect for Marriage Act

Fairness West Virginia joined a coalition of 43 other state-based organizations to thank the senators for passing this bill and to call for continued action to protect LGBTQ people in this country. A copy of that letter can be found online here.

“This bill is an important step forward to ensuring that all families are equally protected under the law. Thank you, Sen. Shelley Moore Capito and Sen. Joe Manchin, for supporting marriage freedom.

The U.S. Supreme Court decided a case in 2015 that legalized same-sex marriage across the country. The bill Congress passed today enshrines this freedom into federal law. It also repeals the Defense of Marriage Act, an anti-family law still on the books that bars the federal government from recognizing same-sex marriages.

Marriage is about love, commitment, and family. Researchers estimate that two million children are being raised by LGBTQ families. It would be morally reprehensible and a logistical nightmare to tear those families apart. Kids shouldn’t have to worry about losing one of their parents, and this bill ensures they won’t.

As West Virginians, we believe that all families are valuable and deserve protection. I’m grateful that our Senators made that clear today.”

The Respect for Marriage Act is simple – it would:

— Repeal DOMA and get this anti-marriage federal law off the books.

— Ensure that the federal government respects all marriages equally for federal law purposes, and require that an individual be considered married if the couple’s marriage was valid in the state where it was performed.

— Prohibit any state government or person acting under color of state law from denying full faith and credit to an out-of-state marriage based on the sex, race, ethnicity or national origin of the individuals in the marriage.

Fairness West Virginia is the statewide civil rights advocacy organization dedicated to fair treatment and civil rights for lesbian, gay, bisexual and transgender West Virginians. Our mission is to ensure LGBTQ people can be open, honest and safe at home, at work, and in the community.