If you’re interested in advocating for the Fairness Act, here is a collection of resources that will help you get started.

Tell your lawmaker to support the Fairness Act

RSVP for the All Kinds Welcome Lobby Day 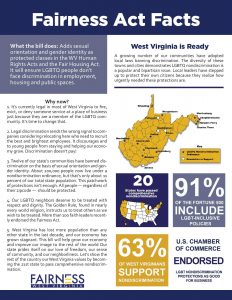 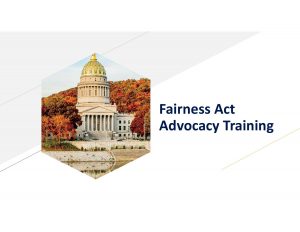 How do the pending Title VII cases before the Supreme Court affect West Virginia/ this bill?

Right now, the U.S. Supreme Court is considering three cases regarding employment discrimination against LGBTQ people and could strip LGBTQ workers of existing federal employment nondiscrimination protections. But no matter how the Supreme Court rules, our work will not be done. Federal law doesn’t currently prohibit sex discrimination (and therefore not yet sexual orientation or gender identity discrimination) in critical areas, such as in public places like restaurants, stores, hotels, or federally-funded programs. That’s why states like West Virginia, and Congress must pass a bill that ensures express and enduring protections for all LGBTQ people, in all areas of life.

The harsh reality is that nearly two-thirds of LGBTQ Americans have reporterd experiencing discrimination in their everyday lives, including on the job – and the number of unreported incidents is likely much higher.

The legislature rejected a similar bill last session, why would this year be any different?

Last year, we made progress in building bipartisan support for our legislation to protect freedom and opportunity for LGBTQ Mountaineers and their families. Earlier this year, Senate Majority Leader Tom Takubo was the lead sponsor of the Fairness Act in the Senate. He was the only Republican legislative leader in the country to sponsor a nondiscrimination bill.

We’ve been working hard over the last year to have conversations with folks from all across the state about what it means to be LGBTQ, and why comprehensive nondiscrimination protections are so important. We’re building bipartisan support among people of all political perspectives, businesses big and small, and people of faith. Momentum is growing for this legislation, and we’re confident that we’re in a strong position to capitalize on last year’s historic progress to advance this bill this year.