The Fairness Act would ensure that no LGBTQ person is fired, evicted or denied public services because of who they are or who they love. The bill seeks to add sexual orientation and gender identity as protected classes in the state’s Human Rights Acts and the Fair Housing Act. Legal discrimination sends the wrong signal to companies considering relocating here who need to recruit the best and brightest employees. It discourages young people from staying in our state and helping our economy grow.

The Fairness Act does not apply to churches or any other house of worship and will not curb the free speech of religious leaders. Religious freedom should not give any of us the license to discriminate as business owners or landlords. 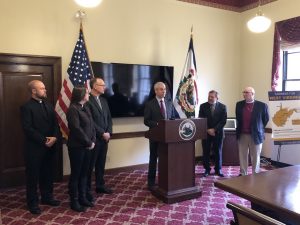 More than 100 diverse faith leaders from across West Virginia signed onto a coalition to endorse the Fairness Act, a proposed bill that would ensure LGBTQ people are protected from discrimination in employment, housing and public spaces. Faith leaders have partnered with us to advance equality in the past, but this was unprecedented. We’ve never seen such a large and engaged coalition of faith leaders coming together to endorse nondiscrimination protections for LGBTQ people. Click here to see the list of faith leaders who endorsed the Fairness Act.

“Each person is created by God, for the Kingdom of God, and nothing we can say or do will remove us from the Love of God. This is why the Fairness Act is needed. While the discussion of human sexuality continues to consume many people’s conversations, nowhere in the Gospel of Jesus Christ are we allowed to remove the ‘God-givenness of any individual or group of people.” — Rt. Rev. W. Michie Klusmeyer, Bishop of the Episcopal Diocese of West Virginia

“In order to remain in West Virginia, our LGBTQ young people need to know that they can build a life here as adults. The Fairness Act ensures their basic rights of housing and employment — a foundation that is crucial for their future contributions to the flourishing of our state.” — Jenny Williams, a Morgantown pastor with the United Methodist Church

“As a member of the Jewish faith, I am proud to stand with my fellow rabbis of our state and spiritual leaders of every faith tradition in West Virginia affirming the fundamental principle that all human beings are created in the Divine Image. The universal message we all share, ‘loving one’s neighbor as yourself’ calls,’ on us to support updating West Virginia’s laws to extend urgently-needed protection to our LGBTQ brothers and sisters.” — Rabbi Victor Urecki, of the B’nai Jacob Synagogue.

As with every bill we advocate for, we’ve seen strong bipartisan support for the Fairness Act. There are so many delegates and senators who want to sponsor this bill that we’ve had to introduce it multiple times. Click the bill number to be read the bill on the Legislature’s website.

We need all hands on deck to pass this important bill. As you talk with your lawmaker about why they should support the Youth Mental Health Protection Act, it’s important to have all the facts at your fingertips. This fact sheet will help you out. 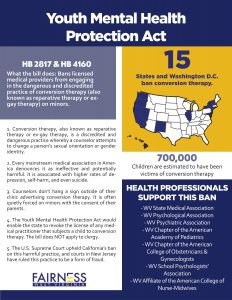 The harsh reality is that nearly two-thirds of LGBTQ Americans have reported experiencing discrimination in their everyday lives, including on the job – and the number of unreported incidents is likely much higher.