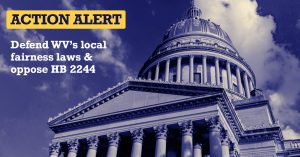 Lawmakers have unveiled their first attack on West Virginia’s LGBTQ community. This morning, a House committee voted in favor of a bill that threatens the 18 local fairness laws adopted by communities across he state.

The bill, House Bill 2244, essentially gives a handful of city residents the power to put nondiscrimination protections up for repeal. Anti-LGBTQ activists have pushed this bill for several years because they know what will happen.

We don’t have much time to act. The bill is heading to the House Judiciary Committee next. Can you tell the chairman of that committee, Del. Moore Capito, to keep it off the agenda? Scroll down to use our tool to email Del. Moore in less than 2 minutes!