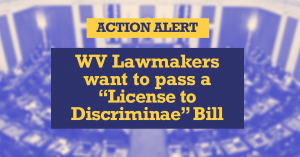 Lawmakers in West Virginia may soon pass a bill that will give anyone in the state a license to discriminate against LGBTQ people in the name of religion. This bill is deceptively called the Religious Freedom Restoration Act, or RFRA for short. We call it it really is — a “License to Discriminate.”

Want some fast facts on what this bill does?
Download our fact sheet here.

West Virginia has lost more population than any other state in the last decade. This “License to Discriminate” bill will put West Virginia at a competitive disadvantage and will make it harder for our businesses to recruit new talent. Surveys of young workers consistently show they strongly oppose laws like this, and these workers won’t want to relocate to our state if we adopt this law. 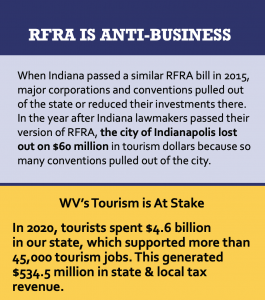 Discrimination is bad for business. The vast majority of Fortune 500 companies (94 percent) have anti-discrimination policies that protect their LGBTQ employees. Businesses are looking to invest and grow in states where their employees won’t be harassed because of who they are or who they love.

Tell WV Lawmakers to VOTE NO on RFRA! Use the form below to quickly email your Senator in less than 1 minute.