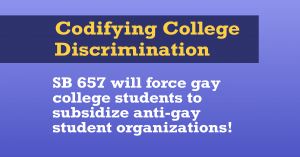 Members of the Senate Judiciary will consider a bill Thursday that would force gay college students to fund anti-gay student organization. The bill, SB 657, is supposed to support free speech on college campuses, but tucked into it is a section that will effectively gut anti-discrimination policies at West Virginia’s colleges.

Tell members of the Senate Judiciary Committee to oppose this harmful bill!

Our colleges depend on recruitment from out-of-state students, and this bill will make it harder to recruit those students. It could force a Black student to fund an openly racist student organization that bans Black students, or a Jewish student to fund a group that excludes them. Students are free to start groups that only welcome like-minded people, but other students shouldn’t be forced to pay student fees to fund these groups.

Use the tool below to quickly email every member of the Senate Judiciary Committee and tell them to oppose the bill or to take out the harmful sections.